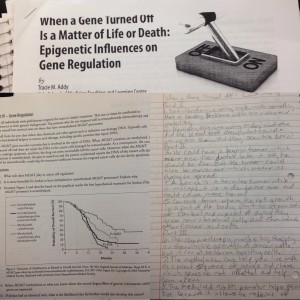 This case study is about how epigenetics influence gene regulation, as epigentics are capable of turning genes off and on. This study is about a boy who had an aggressive cancer in the occipital lobe of his brain. People with this cancer had a lower survival rate depending on their genetics and how they would respond to a medication. In order for the boy to survive, he needed to have methylated MGMT promoters, with radiotherapy and temozolomide. His promoters were methylated and he was given the proper treatment, thus he survived. Epigenetics play a role with this because they are the ones that turned on the genes to create and repair cancer cells.