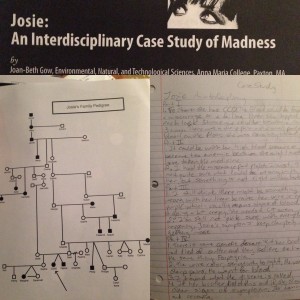 This case study is about a woman named Josie who was experiencing very weird symptoms, wanting to drink blood, had photo-sensitivity, and seemed to be in a state of madness. She was diagnosed with Porphyria, which mimics symptoms of other disorders. This goes with complex traits, because more than one gene is affected to create this disorder and interact with the environment to show the symptoms. This disorder is often misdiagnosed because of the mimicking symptoms it has. Different factors in Josie’s life affected how the symptoms of her disorder showed. For example, she always went out at night to work, so her photo-sensitivity makes sense. She believed her family were vampires, so her want of blood and rare meat became a symptom, and everything going on, with her pain and weakness, seemed to put her into a “mad” state-of-mind. Overall, this case study showed a very interesting disorder that involves complex traits.