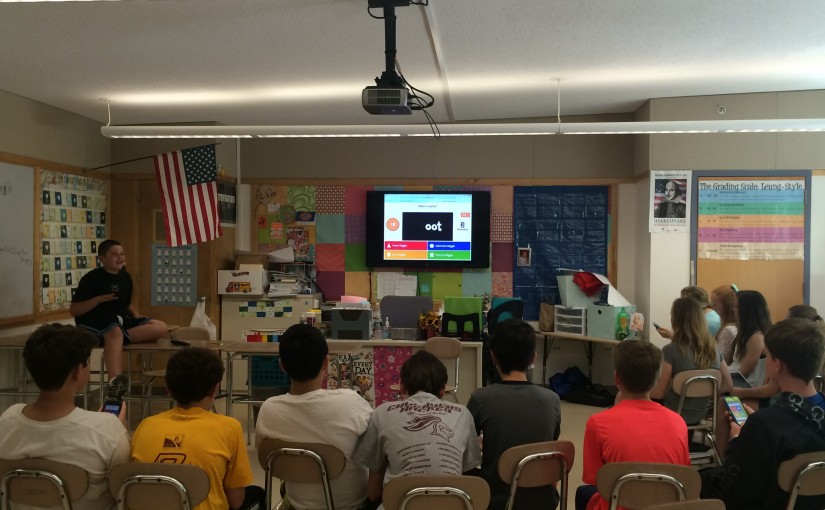 No, the title of this post isn’t a typo.

My experiment in the GDRMS Bring Your Own Device program has been nothing short of Bring Your Own Amazing. Since June 3, students in my Language Arts classes have been allowed to bring their own personal computing devices to class and the response has been more than I could have imagined.

From the first moment students were allowed to take out their phones, tablets, and laptops, the learning environment shifted in the room. Instead of waiting for me to tell them what to do or how to do it, my students are sailing in thousands of opposite, but exciting, directions. One group plans to green screen an app-smash movie trailer with Julie Spang. Two more are constructing Google Sites. Here and there students with earbuds are listening to audiobooks while reading along on a Kindle app. Two boys were sitting knee to knee, sharing a large tablet and when I walked over to see why they were so enthralled, I saw them searching Google Earth for street and landmark names mentioned in Ender’s Shadow to see if those locations really exist. Three other groups are using the classroom iPad to create Socrative or Kahoot quizzes for their peers. That’s not to say that all of the changes are purely digital. They’re even taking more creative leaps with their offline project creation. Students are hand-crafting props, tools, maps, calendars, timelines, cutaway diagrams and other tangible, non-digital work for their projects. The devices we’re using are an enhancement, not a replacement for creation. Some groups are exploring using meter sticks and taking pictures to show the dimensions of a 19th century merchant ship and where it could fit inside the school. Another group researched visual impairments and created special glasses to simulate what it might be like to be a character in Tangerine who has no peripheral vision.

Ultimately, the students in my classes are taking more ownership of their learning and research. They are driven by their curiosity and making big connections to the content, the curriculum, and the world. I am now free to coach groups from the sidelines, challenge their thinking, and guide them toward deeper, more meaningful exploration.

When I step back and watch them work, I think to myself: you’d never know there are only two weeks left in the school year. I can’t wait to see and share their projects with the world.

I started teaching in 2002 and have had the pleasure of working with students in every grade from 7 to 12. I currently teach seventh grade English Language Arts and enjoy working and learning with my students. View all posts by Mrs. Leung

One thought on “BYOA”