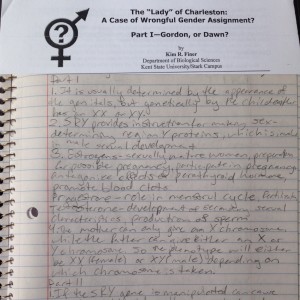 We had to read a case study about a lady who found an interesting article about how a woman from Charleston was said to be assigned male at birth, but then was really a female. This was based on the appearance of certain genitals. Then the woman under went a sex change to become a woman and went on to having a child. The lady who found the article, found it interesting how this women was assigned the wrong gender, had a sex-change, and was capable of having a child. The lady wanted to know how this could have happened. There are different ideas or theories that could come up, but my idea or theory is that the woman was born with both male and female genitals and because the male’s was more prominent, they assigned her as male. The reason why I think this is correct because she was capable of having a child, and she would need to have a uterus for that, plus medicine and surgery was not that advanced for her to have a fully functioning uterus that could hold a child. So, I believe the women was born with both organs.