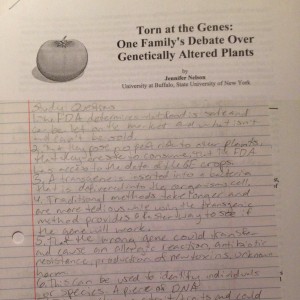 In this case study, there was a family who debated about whether or not genetically altered foods were safe. The mother and eldest daughter were on the not-safe side while the youngest daughter and the uncle were on the safe side. The uncle provided facts and details as to how GMOs help with the environment and can provide a bigger crop yield for the growing population. The mother had added that GMOs could harm the environment and could harm the people eating them. Towards the end of the argument, nobody was swayed for either side, so the debate on GMOs could go either way, it depends on whether you can see the benefit they have.