His parents were Mercedes and Julian Ramirez who worked as a railroad worker.  He had seven brothers and sisters.

Ramirez’s older cousin, Mike, who was a soldier.  After he returned from the Vietnam War, Mike turned Richard onto the thought of torturing and raping women, because Mike told him stories of how he did that in Vietnam, and he had pictures to prove it.  The two of them would worship Satan together and smoke marijuana.  Years later, Richard watched Mike kill his own wife.

Richard was first place in juvy in 1977.  In 1982 he got probation because he had marijuana on him.  Eventually, he moved to California and got into more hard-core drugs like cocaine and started robbing people.  On June 28, 1984, Richard committed his first murder.  A burglary went bad when Ramirez sexually assaulted and stabbed the 79 year old resident, Jennie Vincow.  This first attack was just the beginning to a spree of horrific crimes.  Nine months later, on March 17, 1985, he attacked Angela Barrios.  After she got away from his assault, he killed her roommate.  Later that night, he continued by shooting Tsai Lian Yu.  After these attacks, he was dubbed the “Valley Intruder.”  After only ten days, he entered the home of 64 year old Vincent Zazzara and Maxine, his 44 year old wife.  He created his own personal strategy for killing, that he carried out in most of his later crimes.  He first shot and killed the husband, then sexually assaulted, and stabbed the wife.  Specific to this murder, he gouged out Maxine’s eyes before leaving.  In April of 1985, he used the same routine to kill William and Lillie Doi.  He continued to steal, rape, and murder 12 more people over the next two months, until someone put their foot down and decided that this killer needed to be caught.  The FBI was called in to help.  His final assault took place on August 24, 1985.  The victim identified Ramirez’s car that he had stolen, and the car was found complete with his fingerprints inside.  His mug shots were put in the news, and people recognized him the next day as he was trying to hijack a car in East L.A., but he was instead beaten by residents and the police came to make the arrest.

These crimes all took place in Los Angeles and San Francisco, California.

His motive was a lot of pieces from his past. 1.) He needed to stael thing to pay for his drug habits. 2.) He wanted to please Satan by killing these people, because he was a Satanist.  3.) He remembered the photos that his cousin Mike showed him of the tortured and stabbed women from Vietnam.  Richard wanted to do the to people.

In the Zazzara crime scene, Richard left his footprint in the flower bed that belonged to the couple.  These prints were photographed, cataloged, and cast.  Bullets found at later crime scenes were a match to those found at earlier ones.  The police then realized they had a serial killer.    Richard left some of his victims alive, some purposefully, and some accidentally.  These victims gave descriptions about the suspect, and also about the car he was driving.  Ramirez sexually assaulted most of his female victims, and therefore, he left bodily fluids, such as semen, at the crime scene.  However, since this evidence happened in a time when technology was minimal, it was difficult to compare the DNA.  Lastly, there was a fingerprint left on the mirror of the car that he stole.  This piece of evidence was crucial at identifying him as a suspect, and eventually his conviction.

I would expect there to be more evidence at the crime scene, and I expect that there was.  I believe that since these crimes took place a while ago, there was not such a strict protocol when it came to processing and recognizing evidence.  Since the murderer had long hair, I suspect that some of his hair was left behind at the crime scene, either by being ripped out in self-defense, or falling out like hair does everyday.  I would also expect that there would be DNA under the females fingernails if they scratched Ramirez during the attack.  Lastly, statistic prove that most often, after stabbing a subject over and over again, the blade will slip due to the amount of blood, and the attacker will cut themselves.  Therefore, I would suspect that Richard left behind some of his own blood in combination with the victims.

Ramirez’s car that he stole was reported to the police by a surviving victim.  After the car was put in the news, a young male recognized the car, and took down a partial license plate.  The car was later found and a fingerprint was lifted from the mirror of the car.  This fingerprint was matched to Ramirez, whose criminal history was then revealed, and he became the top suspect.  He was linked to the crimes by eye-witnesses and his finger/foot prints.

The court was delayed for almost three years due to judicial issues, and other obstacles.  The court took 1 year to hear, and then a juror was found killed, which delayed the case further.  Finally, on September 20, 1989, he was found guilty of 13 counts of murder, 5 counts of attempted murder, 11 sexual assault charges, and 14 burglary charges.  On November 7, 1989, he was sentenced to 19 death sentences.

I think that the sheer number of the crimes made this case famous.  This killing spree sent California into a panic.  Also, he made the routine of killing the husband first, and then moving onto the wife famous.  Lastly, I think that using the fingerprint as a major piece of evidence shook the forensic world and proved how valuable the use of fingerprints are. 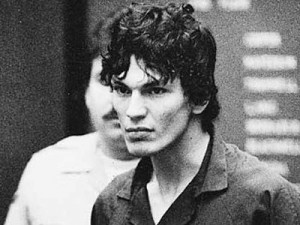