What have you learned about crime scene management and evidence collection?  Do the guidelines make sense to you?  What steps do you think are the most important to secure the crime scene and minimize tampering/maximize evidence location?

Based on the notes from the PowerPoint that we took, and the video that we watched, “How to Commit the Perfect Murder,” I have learned a lot of information that will help me when I need to process a crime scene.  From the powerpoint, I learned about the correct steps to take when processing a crime scene.  Protocol may be broken if one of the step is done out of order, causing the whole case to be ruined.  This is important to know, because if someone does something to risk the evidence of being contaminated, it could not be used in court, therefore, the suspect would have less evidence against them.  I think that the most important steps are to photograph everything, and to keep ALL unauthorized personnel out of the area.  Photographing the crime scene is a great way to catalog all of the evidence in relation to one another.  Before moving and testing the evidence, it’s crucial that the evidence is photographed for court proceedings, and case files.  Keeping unauthorized personnel off of the premisses is also very important.  Although this is tough to do, it’s very important because there cannot be any risk of the evidence being compromised.  This is a difficult job because when someone is killed, often the family is called and goes to the scene, where they can be unruly due to the recent loss.  Evidence cannot be tampered with or else it could be used to falsely accuse someone of murder, and get the wrong person in trouble while the killer walks free.  From the video, I learned about how to kill someone, and to get away with it.  However, I also learned about how to think outside the box to catch someone who did everything they could think of to cover up their crime.  This is a very important skill, because if a trained professional kills someone with very minimal evidence left over, then one needs to be able to wraps their mind around the idea of how it was done, what skills they would need, and who has those skills.  Based on the video, I believe that the most important skills are those that use decomposition of the body, and thinking/testing for possible weapons.  Decomposition of the body is crucial to a murder investigation, because it gives a specific time of death.  I would not be able to work with these bugs, because they creep me out, however, the people who do are important.  Time of death is a huge piece of evidence that can incriminate someone.  If they are related to the victim in anyway, and they don’t have a solid alibi, they will still be considered a suspect.  Testing possible weapons is more my speed, because used test dummies and stabbing them with elaborate objects seems like a good stress relief to me.  In the video, they tested to see if an icicle could have been used to stab someone.  The test was very cool, and I think that these types of tests are important for figuring out the murder weapon.  In class, we had a mock crime scene to practice collecting evidence.  This activity was very helpful to me in my understanding of not disturbing the crime scene, and taking detailed notes/photos.  I have included photos from that activity below.  Disclosure: The blood/gun/victim ARE NOT REAL. 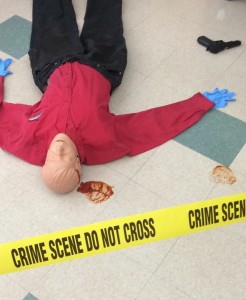 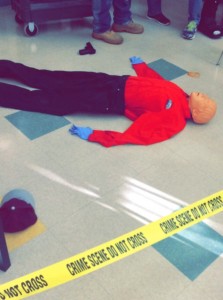