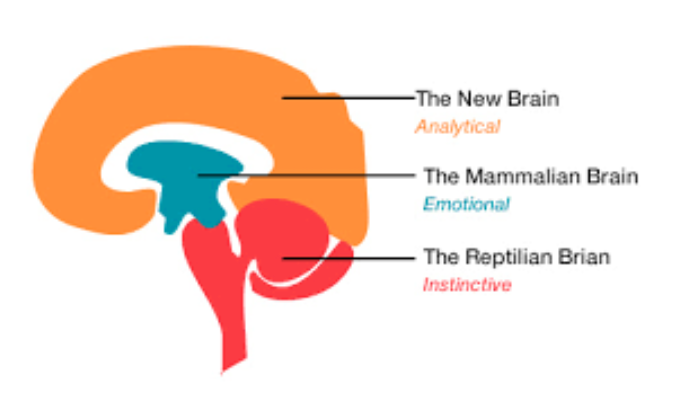 You know that feeling you have when you’re hungry and your mind says “Hey! You’re hungry! You should probably find food!” That is what we call a “Lizard Brain Reaction”. They are also called “Troglodytic Brain Reactions” but, for my sake, we’re calling it “Lizard Brain”. (Lizard Brain is also known as “Snake Brain” or “Reptilian Brain”) (Learn More)

There is a theory that every human (actually every living thing) has a “pre-recorded” set of survival instincts. These “Lizard Brain” reactions have been around since early people. Yup, cavemen had them too. (Learn More) They are very basic things, such as my example of ““Hungry! Find Food!” or “Danger! Activate Defense Mode!””

Here’s a list of a few “Lizard Brain” Instincts/Reactions:
Territoriality, Hoarding of Resources (An example of this is that right now, people are hoarding toilet paper and other resources so that they will have enough for later, but not leaving enough for others.)
Aggression, Dominance (Bullying is an example of this. People believe they are higher than everyone else and need to show that they are.)
Fear/Self-Defense (This is the instinct of, “Hey I should run away because this is scaring me!” or “I should fight this thing that is threatening!” It’s also called “Fight or Flight”)

Even though our brains have much higher functions that allow us to make art, build things, and drive cars, the “Lizard Brain” reactions are still there too! They’re the things that tell us “Do this to survive!”.

I’m calling this “Lizard Brain”, but we are mammals, not lizards. Here’s a question: How are we different from lizards and reptiles? One large difference is that mammals have much more complex emotions compared to reptiles. “Our emotions are processed in several regions that together are loosely called the “limbic system.” They form a ring around our “lizard brain” regions, which evolved earlier. Mammal brains also have an outer layer called a cortex, which helps us control our emotions and make complex decisions.” We usually have stronger emotional bonds with family. We also have better memories, especially memories created with strong emotions.

Next time you feel hungry, or are scared of something, remember, that’s your lizard brain at work!

Beyond Our Lizard Brain | AMNH