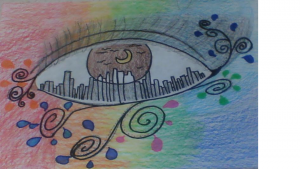 My rainbow eye was created by doing one color (red ) and blending it into the orange and so on.

So the colors were rainbow and going all around the eye. At first I wanted it to look like a eyeshadow. In the middle of the eye I wanted  it to be night time so I put a crescent moon and then I put the buildings so it looked like a city at night time . I got the idea from seeing people doing this and then I thought I could try it. I found some pictures telling you how to draw eyes. I drew two to three eyes and then started to make my final draft. After I made the eye I did the detail and then I made the pupil and the city after I finished the eyelashes I decided it was time to color. I colored the cities that were not in the pupil black and the part that was in the pupilwhite then I colored the pupil brown and the background rainbow and then I blended. The big idea behind my artwork was that it was describing things I like in an eye. That is why I put cities in the middle of it . I wanted this piece of artwork to not look rushed and to look like I took my time. I think that I could’ve tried harder than I did .