Inheritance and linkage between traits are somewhat related. Linked genes are considered genes that are close together on the same chromosome. This close distance allows them to not be sorted independently and to be either inherited together or not at all. Certain traits you inherit can come in pairs; for example red hair and blue eyes are linked traits. Genes interact with each other in ways that can both benefit and harm an individual. Type of inheritance can determine if you have curly hair, or if you have a genetic disease. Linkage can affect the individual assortment of genes you would inherit.

In our lab titled Constructing a Chromosome Map, we had to create a chromosome with traits spread out across it. The overall goal of the lab was to learn about crossing over and the effects of distance between genes with the given example of mutant and normal fruit flies. Crossing over is when genetic material is exchanged between chromosomes. Where the crossing over occurs can be determined by linkage and distance. With this map we had to flip a Popsicle stick to determine where the chromosome would cross over. In the map we constructed above, genes A, B, and C were very close to one another, as were genes F and E. These linkages made it a lot harder for crossing over to occur between them. 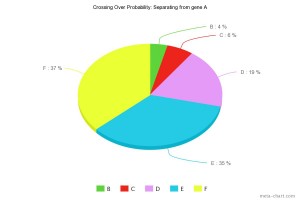 When analyzing our data, you can see that it was very rare for chromosomes B and C to separate from gene A, and that genes E and F almost always separated. Even though E and F are at the opposite end, they still are cut together due to the close distance between them. From this I can conclude that A, B, and C genes are linked and the E and F genes are linked. Even though our data supports the idea of linkage, there are some flaws in the gathering of data. While flipping the Popsicle stick, there were some close calls on where it was going to crossover. Our guesses on some of the flips could have changed our data. If I were to redo this lab, I would be more accurate with the data collection. If I was not sure where it landed I would just redo the flip instead of guessing where it would cross over. Despite the inaccuracy of our lab, the overall concepts were grasped. Our chromosome map was very accurate and depicted the typical situation of linked genes.

Sometimes people believe sex-linked is related to linked genes, but it is just a confusion in the name. When genes are sex-linked, they are either carried on the x chromosome or y chromosome, but they are not by definition linked. Fruit fly eye color is an example of a sex-linked trait. Females tend to have red eyes because that dominant gene along with carrying the recessive mutation of white eyes is carried on the x chromosome, while males can have either red or white since they only inherit one x. A classic example of linked genes would be round-green pea plants and yellow-wrinkled pea plants from Gregor Mendel’s experiment. The traits for color and shape in this case are close together on the chromosome and tend to stay together making them linked. Although the genes are linked, they are not glued together. You may see a yellow-round pea plant, but it is very unlikely.

Linked genes along with many other factors, such as inheritance, the environment, and sex-linked, decide your genotype and phenotype. The variation in where the chromosomes cross over and the occurrence of linked genes creates the individuality we see today. This is what makes genetics have a positive impact. Everyone has their own original look, behavior, and genome. What can be a negative impact is if that inheritance or linked gene carries a mutation or genetic disease. A mutation could have no negative affects, but some create problems with ordinary body function. When a person inherits a genetic disease, their whole life changes and it creates more obstacles for them in their future. This is why geneticists around the world are trying to get rid of all the negative impacts through genetic engineering and have genetics only have a positive effect on life.