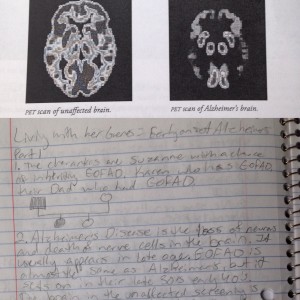 We read a case study about Early Onset Familial Alzheimer’s Disease. It was about a woman who found out that her older sister had been diagnosed with the disease and now she is worried that she, herself, might have the disease since it is an autosomal dominant disease and their father had it. The woman also had to figure out her future on whether or not she and her husband should have children since she would die before seeing her children grow up fully. This type of Alzheimer’s is causes by three possible gene mutations, but the one addressed in the case study is APP, which is rare mutation for EOFAD. In the end, the woman decided to have children.