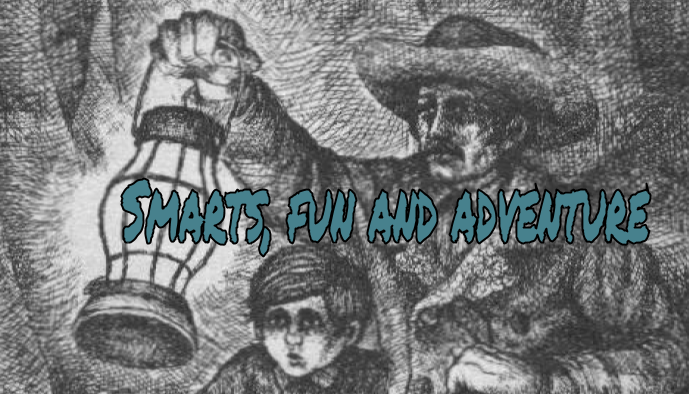 Introduction: The Great brain at camp is about a boy named Peter that has many astonishing plans. First his mom forces him to go to camp. He arrives there and gets bullied, but throughout camp he starts to like camp. When he gets home he definitely wants to go back to camp next year.

“Why do I have to go to camp?” Peter and his brothers moan, as they walk through the park on their way to the train station. They are annoyed by the cold drizzle from the sky and that their mother is forcing them to go to camp.

“Zip it!” his mom abruptly interrupts. In an instant, his mom grabs him and his brothers and pulls them into the long line to get on the train. The smoke from the train blew in their face. They coughed some smoke out. When they are finally to the steps of the train.

Peter and his brothers creep onto the train to go to camp. The old run down train smells as bad as rotten fish. There are patches on the their seats. The lights are flickering like sparks and the paint is peeling off the wall. After Peter looks at the decrepit train, he sits down with his brother Rob and another kid. The kid says, “Hi, my name is Jack. What’s your name?”

“My name is Peter and I’m Rob,” the brothers say in a friendly voice.

A waitress comes down the aisle with a food cart. Jack asks the waitress for three turkey sandwiches. As the waitress walks away, she whispers, “I hate my job.”

When they start eating breakfast, a kid comes to their table and says, “My name is Collin. Can I sit with you guys?” he whispers. Peter says, “Sure,” and Collin sits down. A little while later there is an announcement on the microphone. “We are about to arrive at Camp Wild” the waitress says in her grouchy voice.

They arrive and get off the train to get in a line to walk to camp. The sun was shining so brightly. It made everybody drip with soggy sweat. Peter was walking down a rocky road in line when suddenly a kid pushes him out of the line, and says, “hey punk” followed by a mean laugh. Peter gets a big scrape on his knee and has to go to the end of the line. Peter knew he shouldn’t tell cause then he would be the camp tattletale and no one would be friends with him. There is a big sign at the entrance of the camp and it says “Camp Wild”. Peters knee is sore with pain while they enter camp.

Peter asks Jim where the bathrooms are when They walk fifty feet away from the sign. He says, “Anywhere over there.”

There are three genomes pine trees lined up. On the side of the leafy forest. The bark on them is pulled off on the bottom. “Oh, OK,” Peter says. After that Peter goes to his cabin with his friends. It is full of cobwebs and the bunks are broken. There is also an old, musty rug. Peter and his friends throw their stuff into the cabin and dust puffs fly into the air.

“It is like a dust storm in here,” Collin says.

Then Matt shows them the boating area, the cafeteria, the arts and crafts room, the showers, the sports field and the science room. “Each area has a downside to it. The cafeteria is disgusting. The chairs on the boats are broken. The supplies in the art room are worn out. The water is cold in the shower. The science room is lame and there is no green grass on the field,” Peter says with disappointment. After Matt shows them, they go to the cafeteria to eat lunch. On their way to the cafeteria, Collin says, “This camp must be two hundred years old.”

Soon after Peter and his friends hurry to the cafeteria and go up to the table to get some pasta and red sauce. Josh gets the giant sauce spoon and pours Peters sauce over his pasta. Then he goes back to his table and starts eating. A moment later Collin and Jack come walking to the table and sit down with there food. Peter takes one bite of his food and says, “the pasta is undercooked and the sauce is burnt.” With disgust
Collin moans, “I agree.”

Pretty soon, the kid from the line comes over and picks on Peter and his friends. They get into a big fight. A kid named Ryan yells, “Food fight!”, so the bully smashes his saucy tray into Peter’s face and everyone starts throwing food at each other. Ethan, one of Peters brothers, is the only one that doesn’t fight he just sits down and does nothing.

As soon as Bunsen comes in he is astounded to see what’s happening he yells. “QUIET!” and everyone goes silent. Bunsen says, “who started this?” in a angry voice. Everyone points at Peter and the bully who’s name is Kyle. Bunsen glares at them and says, “go to Josh’s office.”
They slowly walk to Josh’s office. It is a old little cabin the door hangs on the tip of its hinges. Josh’s desk is covered with rust and everything smells like mold. Josh says to each of them, “you will get ten strikes given to you, and if you get twenty you have to repaint the canoes. The camp has lots of canoes that need to be painted. Suddenly he says, “go take a shower” and then says “yuck” when they leave his cabin.
They take their showers and the water from the showers is freezing cold. When they’re done they rush out to get there towel and then start walking to their cabins with their towels around their waists. On their way, Collin says, “we should make a bathroom the only problem is where should we put it?” to Peter

“I will put my great brain on that,” Peter says. Peter thinks for a couple minutes. “Ah Ha! I know where we are going to make a bathroom”! “Let’s go!” “Guys don’t forget about changing,” Collin says.

“Oh right,” Peter replies with a laugh they run to their cabin to slip on there clothes. When they are done, they walk into the wet woods and brush out a clear a spot and then start digging. After a half hour they finish. They found a brand new toilet seat in the woods to use and washed it. Peter and his friends ‘high five’ each other. After that, Peter clarifies that each of them can own 20% of the business, and he will own 60%. “We are going to make people pay 30 cents to go to the bathroom every time they go. And I will think of where we are gonna make a candy store.”

“Can I go to the bathroom,” Collin says. “Yes,” Peter replies.

Soon after that they walk to the lake. They take one glance at it and they can tell the water is green with algae and they can tell there were a ton of blood suckers in the lake. They didn’t want to go in, but Phil pushes them in. Peter says, “this is more like lake filthy than lake swim.”
Then after an hour at last it is time get out. So they get in line to go to the cafeteria for dinner.

When they get there the cafeteria is a mess. Nobody cleaned it since lunch and it smelled like smelly cheese. Everyone ate quickly so they would not have to smell the odor too long. After dinner it is time for bed. Everyone goes to the water spigot to brush their teeth and then everyone hops into the bunk. The bunks are as hard as stone. Even worse everyone except Peter snored in his cabin, so it made it even harder to sleep.
At the six o’clock wake up bell in the morning, everyone’s eyes were wide open and puffy red like fire. Everyone had to get up and go to their activities.

Peter and his friends have sports with Kyle and five other kids. The counselor for sports is Jim. They played capture the flag. Peter by accident ran into a boy and he sprained his ankle. The boy could barely walk, so Jim took him to the nurse when. Jim is gone everyone attacks Peter.
Then Jim comes back and everyone goes to free time. Peter and his friends make a candy store below the woods.

Then they dig a hole under the giant wooden fence to go to the candy shop to buy some candy. When They get back to their candy store, there is a huge line for candy at the entrance. That morning, Peter earned 10 dollars from candy that was a lot of money back then. Then it is lunchtime, Peter and his friends offer to clean the lunch room. Josh says, “sure go ahead.” They start cleaning after about 40 minutes went by they were done. The cafeteria looked sparkling clean. Josh says, “good work.” He agreed he will make them whatever they want for dinner and breakfast for the rest of camp to pay you back for cleaning the cafeteria.

“Thanks” Peter says and also Josh says,” you won’t have to go swimming if you don’t want to.”

The rest of camp flew by for Peter and his friends. When he gets on the train with everybody, he waves to Josh and he waves back. When he finally arrives at his house. He was missing camp and definitely wants to go back to camp next year he told himself.

After a month had past from getting home, Peter is counting all his money he earned at camp his mom hands him a letter it’s from Jack. He opens it and it says…

“It turns out camp is not that bad after all,” Peter says to his mother. She smiles.