In January, I wrote that a traditional assignment, submitted to the teacher, graded behind the scene and sent home to be recycled, is no longer an effective method for monitoring student achievement. In addition to lacking an authentic audience and not reaching students where... (Read more)

Google Apps for Education has a wonderful suite of tools and with available themes and the ability to embed into your digital portfolio, Google Slides is a great presentation tool! For students looking to bring over a Google Slides presentation, embedding requires the student to publish the presentation to the web, then copy/pasting the embed... (Read more)

Google Hangouts on Air allows you to broadcast a live discussion that is posted to your YouTube channel. I previously used video conferencing tools ie; Skype and Go To Meeting, however Hangouts on Air brings this to a whole new level because it records your online activity. I can honestly say it was difficult to... (Read more)

Zaption is a fantastic web app I integrated in my 21st Century Communications Technologies courses. Zaption allows a teacher to create their own video lessons using different forms of multimedia. You can combine images, YouTube and other video clips, etc. to create a unique video that can be shared with your students. The best part... (Read more)

Google Classroom is the tool that has enhanced my learning as a classroom teacher. I have used Doctopus for several years to push out and grade student assignments. Doctopus allowed me to have an organized folder system for each of my classes, as well as allowing me to use Goobric, an add-on rubric that attaches... (Read more)

Anemia is a genetic disorder that causes pale skin, lack of growth, malaise, lethargy, and gastrointestinal distress. Most common treatments, like a high iron diet, does not alleviate the symptoms as they normally would. It is usually detected by a CBC, or a blood count.

Case Study: "Do You Know What You're Eating"

The structure of this case study was very strange. It opens with a fictitious article detailing an incident where a child died from an allergic reaction to genetically modified corn. They next segment includes a fake letter to the editor detailing all the factual errors in the fake article. This entire case study felt pointless... (Read more)

My Thoughts on Geoboards by Math Learning Center, Screencasts, and Google Hangouts

One of the assignments during the Google Apps for Education course was to become familiar with Google Hangouts on Air. I did this by first researching the tool Thinglink, created a screencast on how to use the tool and then shared this with my classmates. You can see this video below. Next, I posed questions... (Read more)

Around the world with Google Sites

Over the past few weeks, my students took on the exhilarating challenge of opening their own travel agency.  Well, not a real, functioning travel agency that real tourists would book through, but one that would take our Spanish II Honors class on a virtual journey through Ecuador, Argentina and Peru.  Students were given the task of... (Read more)

An Analysis of Sjogren’s Syndrome

Research Question: What is Sjogren’s Syndrome, and how do genetic and environmental factors compound to cause its symptoms?

Sjogren’s Syndrome is an autoimmune disease where the immune system attacks... (Read more) 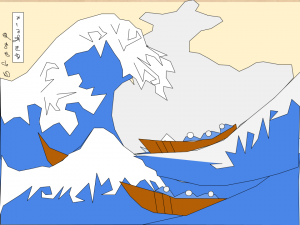 My piece is a digital recreation of the famous painting The Great Wave of Kanagawa made by Hokusai.

Calling All Departments: A Case for Digital Portfolios

Abstract: The Groton-Dunstable Regional School District (GDRSD) is a pre-kindergarten through the twelfth-grade regional district with a current enrollment of 2,500 students. All students are learning in a technology-rich learning environment with reliable network infrastructure, modern computing devices, and a standards-focused curriculum. With continued progress toward student growth targets on the Massachusetts Comprehensive Assessment... (Read more)

1. In Frye v. United States, James Frye was accused of the murder of a physician. Frye first admitted that he had committed the crime when he was first arrested, but later took back his statement... (Read more)

His parents were Mercedes and Julian Ramirez who worked as... (Read more)

Reflection on the film "What Darwin Didn't Know"

The film “What Darwin Didn’t Know” explains the advances that have been made in evolution since he passed.  With new technology scientists have been able to find exactly which genes between and within  species have mutated and changed. Through knowing which genes have changes and how great the changes are, scientists are able to figure... (Read more)

Genetically Modified Organisms, the Step into a Golden Age, or the End of Mankind?

In the past several years, a new technology has arisen known as Genetically Modified Organisms, or GMOs. GMOs are organisms that have had their genetics purposefully changed by humans in specific ways. This is different than selective breeding where the genetics are changed slowly and imprecisely. GMOs are also different because the introduced genetic code... (Read more)

The Science of Huntington's Disease

Huntington’s Disease is a genetic disorder caused by an inability to produce properly formed Huntingtin Protein. The day’s functional protein is caused by a series of CAG repeats along one part of Chromosome 4. The altered Huntingtin causes neurological breakdown in the Basal Ganglia and cortex leading to difficult cross-brain communication and motor control... (Read more) 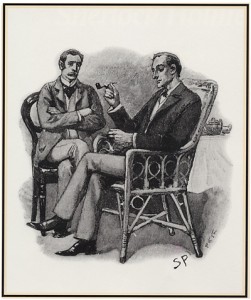 I read the first Sherlock Holmes story, titled “A Study in Scarlet”. Throughout this story, there are many different techniques used to help scientifically. Holmes is described as almost mad, and an outsider. Holmes is found attempting to discover a reactant with Hemoglobin, or... (Read more)

After many hours of hard work, researching and dedication, I completed the Google Apps Ninja Program and become the first Google Apps Master in the district!

There were four modules in the Google Apps for Education program including Gmail, Drive, Calendars and Search. In order to pass each exam and become a Google Apps Master,... (Read more)

It’s usually tough to drag yourself out of bed the Monday morning after vacation, but not so much this week!  Thanks to an email over vacation, I knew that there was the best first-day-back-from-vacation present EVER waiting for me in my classroom:  a dedicated class set of 30 new ChromeBooks, thanks to a grant from... (Read more)

Students from E Period Math share their thoughts on the new ChromeBook cart provided through a grant from GDEF:

Having computers every day is great,

Because writing is something I will always hate.

Now everything we can type,

It makes a much easier life.

Students from C Period Math share their thoughts on the new ChromeBook cart provided through a grant from GDEF:

My name is Sydney and I am in 7th Grade Pre-Algebra 1 with Ms. Durling. In our daily classes we use chromebooks a lot but not as much as we do... (Read more)

One of our new standards in seventh grade math under the Common Core State Standards asks students to be able to visualize and predict what two-dimensional shapes will result from slicing a three-dimensional object with a plane.  For example, slicing a sphere will result in the creation of a circle, but slicing a cube will result... (Read more)