You will need to research the kidnapping of the child of Charles Lindbergh and Anne Morrow Lindbergh.  In doing so, you will need to answer the following questions IN YOUR OWN WORDS and thoroughly.

On March 1, 1932 Charles Augustus Lindbergh, Jr. was kidnapped from the nursery in the second story of the Lindbergh house.  This occurred at 9:00 p.m. at which time, only the nurse for the family was home.  When the police were called, in a sweep of the house, they discovered a note demanding $50,000 on it in exchange for their son back.  There was a ladder leading up to the nursery window, along with mud footprints on the floor.  However, there were no fingerprints or blood stains in or around the nursery.  Colonel Lindbergh asked his friends to help him in communicating with the kidnapper.  On March 6, 1932 Colonel Lindbergh was sent another ransom note.  This time, demanding $70,000 instead of the original $50,000.  At this time, Colonel hired private investigators, and the governor of New Jersey called a meeting with the police.  On March 8, 1932, another ransom note was delivered to the attorney of Colonel Lindbergh saying that a “go-between” person would be allowed.  In other words, a person could communicate with the kidnapper for the Lindberghs, all they had to do was put a note in the newspaper with the persons information asking if they would be acceptable.  A retired principal, Dr. John F. Condon, volunteered, and wrote a letter in the newspaper.  The next day he received a ransom note saying that he was a fine person to communicate with.  The Lindberghs gave Dr. Condon $70,000 to pay the kidnapper for ransom.  Immediately, Condon wrote newspaper articles and received ransom notes as they discussed the payment details.  On March 12, a taxi driver gave Condon a fifth ransom note from an unknown man.  It gave instructions of where the next note was.  As he followed the clues, he eventually met with a man who called himself “John.”  During this meeting, Condon stated that he wanted proof of the child, and “John” agreed to give it to him.  Along with the seventh ransom note was a child’s pajamas.  Lindbergh concluded that they were his sons.  In the next ransom note, the kidnapper explained that the crime was planned a year in advance.  A couple ransom notes later, Condon was told to have the money and to meet him.  Another taxi driver delivered the next ransom note with more clues on where to find the next note.  Condon met with “John” again and gave him $50,000 for a note explaining where to find the child.  The following day, a complete search was done on the ship that the child was said to be on.  He was not found.  On May 12, 1932, four and a half miles from the Lindbergh house, was the decomposed body of the kidnapping victim.  The coroner concluded that a blow to the head two months ago was the cause of death.  President Roosevelt told F.B.I. Hoover to pay some of the ransom in gold certificates.  In August of 1934, the gold certificates started popping up, and a trail was made.  A bank called the police when it had a gold bill sent to it from a gas station.  The gas station employee thought that the customer was suspicious and he fit the characteristics of “John,” so he wrote his license plate number on the $10 bill.  The car was traced back to Bruno Richard Hauptmann.  He was taken into custody and admitted to making purchases with the gold bills.  The first taxi driver positively identified him.  Hauptmann’s signature was compared to individual letters from the ransom note in Washington D.C.  They handwriting was a match.  Hauptmann was indicted for extortion and murder.  In his trial, he was found guilty of first degree murder and sentenced to death.

After the body was found, the police still had monumental evidence that helped them catch and convict their killer.  They still had the ransom notes that “John” hand wrote.  They still had the ladder that was made for the occasion of the kidnapping.  They still had eyewitnesses who saw “John” and had a sketch of him made up.  Lastly, they had the gold bills waiting to be spent.  Once these started showing up, they got closer and closer to catching the killer.

The ladder was important to the investigation, but not until it was compared to other things owned by Hauptmann.  Once Hauptmann was in custody, the police searched his house and discovered a tool that was a match to the tool marks on the handmade ladder.  Also, the type of wood used in the ladder matched the wood that furnished Bruno’s attic.  The ladder was proved to be handmade by Hauptmann.

Hauptmann had the exact same handwriting as the killer that wrote the ransom notes.  He also had a striking resemblance to the photo made based on the eyewitness accounts that Condon made with “John.”  Hauptmann was the one who the gold bills traced back to.  He was the one who they were given to for ransom, and now he had them in his possession and he used them to make purchases of items located in his home.

Ladder outside of the nursery. 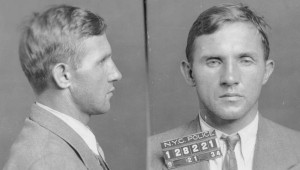