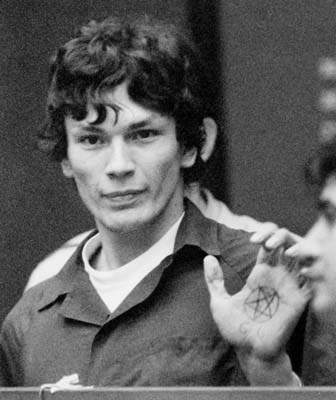 Richard Ramirez was born in El Paso, Texas, in 1960. He was one of seven children born to an abusive father. Because of the abuse, he spent a lot of time with his cousin Mike, a green beret who had recently come home from vietnam. Mike got Richard into  marijuana and satanism, and also recounted tales of vietnamese women he raped and mutilated. Mike had photo evidence of this. Ramirez was also present when Mike murdered his wife, thus starting the development of a serial killer. He dropped out of Jefferson High school and adopted strange sleeping habits.

The crimes followed a pattern of invading  a house at night, killing the husband, then raping and mutilating the body of the wife. Eventually, Ramirez killed 13-16+ people, all through shooting, stabbing, or beating his victims to death.The dates of the murders are as follows; March 17, 27, 29… one in June, July 7, 20… August 6, 8, 17, 24. The spree happened in California. There was no clear motive for the crimes, but what caused it all was the dark childhood that he had.

Ramirez left many pieces of evidence at the scenes of his crimes, not limited to but including the bodies of his victims, bullets and shells or casings, stab wounds, and all sorts of DNA samples as side effects of vigorous activity. He also left some victims alive. They had some testimonies and identification details to give to the police. I did expect the police to trace the bullets back the the owner or run some DNA tests on the semen left behind in the rape victim’s bodies. More lives might have been saved had the police investigated these before they investigated the fingerprint in the car. The thing that led him to being a suspect was when his car was identified by a victim and half the license plate number was written down. The car was found by authorities and a fingerprint was identified as that of a texan drifter named Richard Ramirez.

On September 20, 1989, he was found guilty of 13 counts of murder, 5 attempted murders, 11 sexual assaults and 14 burglaries. Ramirez was given 13 death sentences. He died in prison 28 years after the last murder.

The elements of this crime spree that make it famous are the fact that it happened in such a short time and with no subtleties whatsoever. This along with the police’ inability to solve the case until a half a year went by sent people into a frenzy. The papers took advantage of this local hype and spread it all over the country.