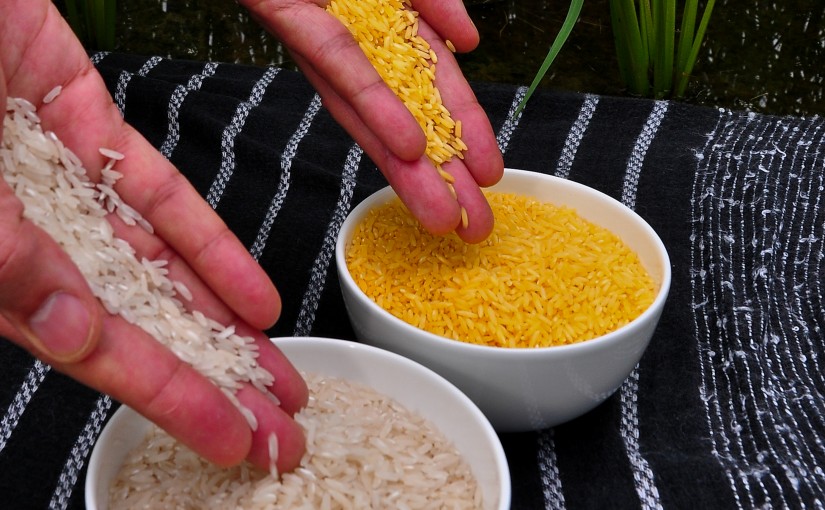 …Genetically Modified Organism is an incredibly vague term that is often used to describe crops that have had genes added or removed from them for a specific purpose. A well-known example of this is Golden Rice. Golden Rice is a species of rice that was modified to carry a gene from a daffodil to produce B-Carotene. B-Carotene is a key nutrient in the bodies production of Vitamin A. The goal of this addition was to allow rice crops in areas of high dependency on rice for food to have access to Vitamin A, uncommon in normal rice. In adding this gene, researchers hoped to market the rice throughout the world to people suffering from Vitamin A deficiency as a solution to the problem.

In response to this creation, many people have decided to voice their opinion on the value and threat of GMOs. Many anti-GMO positions question the health risks of GMOs including risks of toxicity or allergic reactions. They also fear the risk to the environment when GMOs are introduced to the fields. They worry that GMOs will act as invasive species and can cause long term environmental destruction. Pro-GMO arguers refute the accusations sighting the numerous safety codes that GMOs must meet, proving their healthiness, and how GMOs often reduce the need for chemicals in farming to reduce the ecological damage of farming. The real issues, that is rarely discussed, are the need for GMOs and the vagueness of the term.

Returning to the Golden Rice example, Golden Rice was created in response to Vitamin A deficiency throughout the developing world. It targets regions that are highly dependent on rice for the mainstay of their diet. The researchers are trying to solve this problem through science. The issue with this though is that the problems with Vitamin A deficiencies are a byproduct of the Green Revolution in the 1960’s and 1970’s. In India, for example, pre-revolution farmers had a much more diverse food supply but as the revolution occurred, it became profitable and easy to grow and harvest rice. The farmers moved away from diversity towards profit and wealth. This is the real issue, profit at the expense of diversity. A true solution to the issues of the region is not to manipulate rice until it provides every need, it is to reintroduce diversity in a way that it is profitable to the farmer, create a large incentive for diversity.

The other major issue of GMOs is that the term itself is incredibly vague. Many European countries are outlawing GMOs regardless of condition. This is classifying all GMOs as bad regardless of their benefits or hindrances. GMOs need to be examined on a case-by-case basis to determine their health and environmental impacts, positive or negative. We need to not classify all GMOs as good or all GMOs as bad. We need to evaluate every single one and decide if it is better than all other alternatives to determine its value and its validity.

GMOs are a current issue that need to be thoroughly evaluated on an individual basis to determine if they are the best solution to the current problem. They need to be proven healthy to humans and the environment. They need to be discussed individually instead of as GMOs as a whole. Finally, GMOs should be discussed in a way that does not lead to the repetitive debates over their health merit and environmental impact…

One thought on “A Letter on GMO’s”