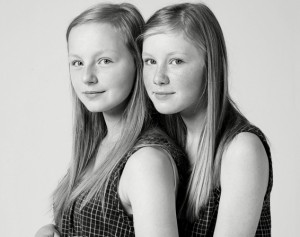 Epigenetics is the study of the chemical reactions that activate and deactivate parts of the genome at strategic times/locations, and the factors that influence them. According to the article within the case study, during an identical twin’s lifetime, epigenetic changes occur to their DNA that can affect gene expression. Therefore, one twin can express a certain trait while the other cannot. The twins still have identical DNA, but they might express different traits because of different epigenetic changes. These epigenetic changes are influenced greatly by the twins’ behaviors and environment. Temperature, for example, is a big factor. An experiment using two alike flies—both hatched with white eyes—proved that raising the temperature caused them to lay offspring with red eyes. This offspring can then pass these changes onto its own offspring. These traits can be passed on to every generation, or they can skip generations. Traits skip generations when the mother has the specific trait, but the father does not.