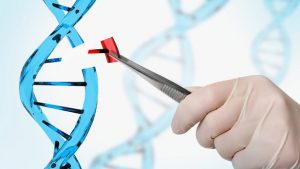 Genetically modifying humans brings up many ethics question, ranging from should scientist change anything about the original genetics to creating what is known as “Designer Babies”. “Designer Babies” are the idea of engineering babies to have certain traits that the preferable to the parents like a certain eye color, height, or athleticism. Many people see this as morally wrong, to change what a human is even when there is nothing wrong with their genetics to start. In the middle of the controversy is those who believe the gene editing in humans should allow be used to change a predisposition for genetic diseases.

In more recent time scientist, Jiankui He, has challenge the normal standard for genetic modification, when he created the first gene edited babies. He edited the genes of two twin girls to reduce their risk of contracting HIV, but some say the risk of the procedure to change genes was not needed as there are safer ways to prevent the virus. He argues that this procedure in needed for some families to have the opportunity to have a healthy child, but agrees that there should still be limits on what can be genetically modified, for example not editing to enhance intelligence.(Saey 2018) 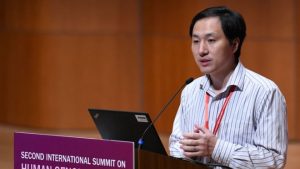 Jiankui He speaking at the international summit.

In He’s case the gene edited was the CCR5 using the CRISPR/Cas9 tool, this produces the protein that is often affected by the virus. He disabled CCR5 when the twins were fertilized eggs, this procedure had never been done on embryos, but the same gene surgery had already been used safely on adults. The procedure may at the time to see healthy children, but the effects of the edited genes are not know, so later in life the children could be left with mutations that could cause harm. In years down the line this same surgery could be seen as perfectly normal, but the current time seems to not have been ready to see the research in action without proper testing on animals and embryos used for pregnancy.

The CRISPR/Cas9 tool is a more recent tool with seemingly a lot of benefits in gene editing as it is faster and more accurate then other methods. This follows a similar idea as vaccines, using small pieces of the virus DNA to help fight the virus in the future. In particular the pieces of DNA from the virus are used created CRISPR arrays that allow the bacteria to remember the virus and create RNA strains that can fight the virus off. The Cas9 is used to disable the DNA by cutting the DNA segments.(Wang 2018)

The gene surgery on the twins led to many question on what restriction should be in place surrounding gene editing research and use. This may set the entire field back, if new restrictions limit what researchers are able to learn less progress will be made toward developing this methods for the future.

What are genome editing and CRISPR-Cas9? (n.d.). Genetics Home Reference. Retrieved from US national library of medicine database.