Genetic variation is caused by the traits received from our parents that makes us different from other groups, with mutations the most common and basic definition of such. When a trait runs in a family, such specific traits are passed down that continues the variation between other families. Even if something runs in the family, however, it does not guarantee that one will receive that trait. It might make them more likely, but other direct, environmental, and epigenetic reasons can change this. 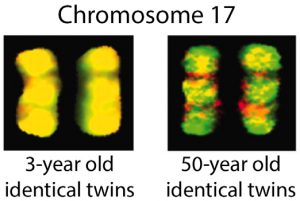 In one infamous experiment, sets of twins within different age groups were tested for their DNA profiles. The younger the twins were, the more likely their profile would match since they were raised in a similar environment. Older twins showed vast differences since they each experienced different events over their lives. No matter the size or importance of an event, the modifications made to the gene expression varies from person to person, making everyone, including identical twins, unique.