Streptococcus pneumoniae was an important research topic in the 1920’s for several reasons. Not only could pneumonia could be treated or cured, but scientists could learn which molecule in the human body contains DNA through the research. The smooth strain of the disease contains a coating that protects the bacteria long enough to cause the disease, while the rough strain does not have that feature.

In another experiment, scientists used proteases, DNases, and RNases to treat dead smooth bacteria. The enzymes could repair the broken protein, DNA, or RNA from the bacteria. Since the bacteria damages the genetic material of the cell, the living mouse with the correct repairing enzyme shows where the material is. In the end, the mouse injected with the DNase survived. This showed that genetic coding is found in DNA. We know that as an everyday fact now, but in the 1920’s, it was groundbreaking. 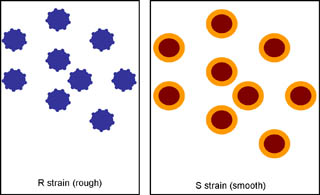