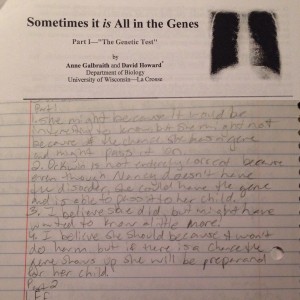 This case study is about a pregnant wife who participated in what seems like a harmless medical genetic study, but turned into a bigger problem. She had her blood taken believing that she wasn’t a carrier for cystic fibrosis, but the result ended up with her being a carrier of the gene. She had her husband tested just in case and he was positive as a carrier as well. So, they had to go to genetic counselor to figure out what they could do. They had the embryo tested and the child was positive and had cystic fibrosis, which is when the mucous is thicker than normal causing lung problems. This study shows how the family was able to catch a genetic disease and prepare for what could come of it as the child grew older.