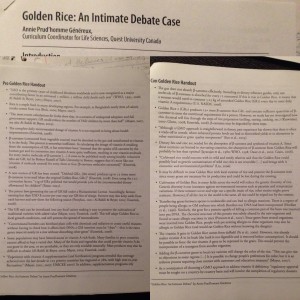 We read a case study about a debate over genetically modified rice called Golden Rice. This rice was made to produce vitamin A because they are trying to find a food source that could provide nutrient for developing countries. This activity was where we could take sides on whether or not golden rice would be a benefit or a disaster. My partner and I took sides, where I had the pro’s and the other had the con’s. My pros were that rice was a staple food in developing countries, that the Golden Rice trait could be introduced to other varieties and create other varieties with the same value, and that Golden rice is self-fertilizing. The cons were that the gut does not absorb the vitamin A efficiently, it could be difficult to cross the Golden Rice with the other varieties, and transferring genes could cause allergic reactions. This was a good way to see the good and the bad about the Golden Rice.